Add some hard rock and metal power to your productions with the Vinny Appice Kit for BFD2/3 from Sonic Reality. Featuring expertly-recorded multitrack samples of Vinny’s 8-piece maple ddrum® kit and Istanbul Mehmet cymbals and hi-hats played by Vinny himself, you can now bring all the heaviness, weight and drama of Vinny’s signature style to your music. Vinny s unique, powerful drumming is marked not by his performances with a single group, but rather by his flawless musical contributions to an extensive list of rock and roll icons like Black Sabbath, Ronnie James Dio, Heaven & Hell, Rick Derringer, John Lennon and more! 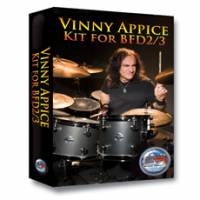